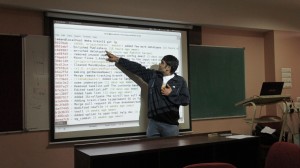 We also organized a small session on why and how to contribute to open source projects at gCon 2012 today. We conducted gCon (BVP GTUG's tech convention) at Bharati Vidyapeeth's College of Engineering, New Delhi on 14th March as a sequence of free sessions, demonstrations and a few competitions to cater to the segment of students who are interested in technical activities during technical fests instead of their more common counterparts which are slowly becoming the norm. As a result we got a moderately sized, but very enthusiastic, fraction of the crowd. Almost every person who participated in the sessions or demonstrations stayed back to interact more or followed up with hosts/creators for more. 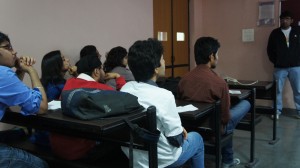 Over 200 people participated in gCon's various events. We had a total of around 40 B.Tech students from BVCOE, USIT and a few other colleges attending the session on open source which lasted for two hours. The session was jointly organized by Aman Madaan, Rakshit Sareen and I. Our objective for the session was to give a kickstart to students willing to contribute to open source projects at a level where they can easily contribute. Also, if they contribute to a project where they can meet other contributors in the college itself, we believe they are more likely to ask for further help than give up. All the participants were from various B. Tech. courses from these colleges. Most of them were users of popular open source products like Firefox and Ubuntu, but not familiar with the how the FOSS community functions.

A short introduction to how the Open Source movement came to be was given. It covered how and why the need of creating an open source project arose. Also, why we need VCS and how Git came to be. After which Aman and Rakshit explained how version control helped projects relying on simple diff and patch methods (with demonstations). They then explained how to use Git to manage our own projects (and music files, images etc) with live demonstrations.

Aman created an application for generating well formatted dummy data for use in the popular application Weka called WekaGrain. The application is at a small stage with 3 contributors, (Me, Aman and Rakshit) but has already proved itself useful in lab practicals in our college. The applications and how to contribute to it were discussed. 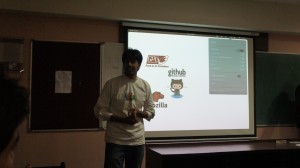 After this, I took a short while to explain how open source projects help in maintaining an open environment. I pointed out that code is just one part of the story. It's important that we start using this stuff (and report as many bugs as possible). I explained how one browser's monopoly would cause it to influence what the web becomes and pointed out the importance of decentralization in any technology. Also, how contributors to Mozilla Firefox are helping to create a safe and better experience. The Mozilla Student Reps program was also introduced to the students while telling them how to help Mozilla and how they can benefit from helping. The best way to be able to get closer to the Mozilla community and contribute would be to sign up and keep themselves updated.

I find it easier to communicate when instead of telling them how they can benefit, I give them 'examples' (i.e. long stories) of how real people got to learn stuff. One such example (which I unfortunately missed in the session, but did recount to a fellow after the session) was how I got to learn how to use gdb while some person on IRC helped me for 4 hours to file a bug report. This is much more effective than simply stating, "contributing to projects like Nightly will help you learn about tools like gdb".

Due to time constraints, we had to skip a lot of the content but we have enough for another, albeit longer, session for our own college students. Also, if we repeat the session at a time when the other students are not busy with events and fests by other societies/groups, we are likely to get a much larger crowd. The only advantage we had by conducting this session while our college had a lot of events running in parallel was that we got a chance to interact with students from other institutions too. The real question is, was this advantage worth the moderate turnout? Let's see how many people start contributing (or even watch) the repository, and how many people decide to approach the community in other ways.